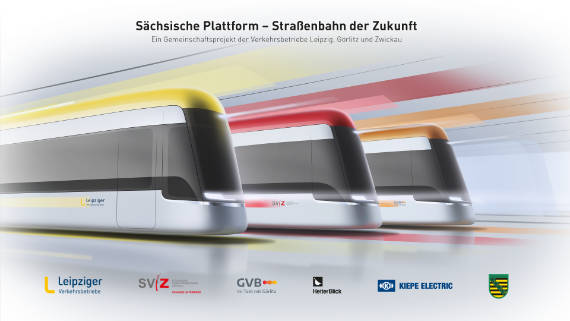 The Leipzig tramway manufacturer HeiterBlick, together with Kiepe Electric, has been awarded the contract for the delivery of up to 155 trams to the Leipzig public transport company and further vehicles to the transport companies of the cities of Zwickau and Görlitz. The supply contract was signed in Leipzig on 15 December by representatives of the three public transport companies LVB, SVZ and GVB, as well as HeiterBlick and Kiepe Electric. This was preceded by a Europe-wide tender for the project entitled "Saxon Platform - Tram of the Future", which had been running since 2019.

HeiterBlick GmbH and the Düsseldorf-based supplier of electrical systems for rail vehicles, Kiepe Electric GmbH, had bid for the contract as the LEIWAG consortium. "As a Saxon tram manufacturer with production sites in Leipzig and Grimma, the contract to supply the Saxon platform vehicles is a great honour," says a delighted Samuel Kermelk, Managing Director of HeiterBlick GmbH. The joint procurement programme of the three public transport companies, which runs until 2030, includes spare parts packages in addition to the vehicles and development costs.

Up to 130 trams for Leipzig

For the Leipzig public transport company alone, HeiterBlick and Kiepe Electric are developing 25 45-metre vehicles as part of the supply contract, with the option of adding up to 130 of the 2.40-metre wide trams. "As part of the Mobility Strategy 2030, we are gradually shaping the transport turnaround for citizens in Leipzig. This also includes modern, attractive trams. I am all the more pleased that a Leipzig company was able to prevail after an open, Europe-wide procedure," said Leipzig's Mayor Burkhard Jung.

Two thirds of the value added for the contract will take place in Central Germany, almost 40 percent of it in Saxony. This strengthens the industrial location in the Free State and secures local jobs. The main goal of the joint project of the transport associations of Leipzig, Zwickau and Görlitz is to master the climate-friendly transport turnaround in the municipalities. Therefore, the offers of HeiterBlick and Kiepe Electric also include solutions and concepts for driver assistance systems and alternative drives such as hydrogen fuel cells, which HeiterBlick is developing at its headquarters in Leipzig.